You are here: Home » News » What is an ER collet

What is an ER collet

What is an ER collet?

Placed in a chuck, a collet forms a collar around the tool to be held. The standard ER collet is the most widely used tool-clamping option for machining applications. Commonly used to hold endmills, drills, taps and reamers, ER collets exert clamping force when tightened with a nut.

The "ER" collet system, developed and patented by Rego-Fix in 1973, and standardized as DIN 6499, is the most widely used clamping system in the world and today available from many producers worldwide. The standard series are: ER-8, ER-11, ER-16, ER-20, ER-25, ER-32, ER-40, and ER-50. The "ER" name came from an existing "E" collet (which were a letter series of names) which Rego-Fix modified and appended "R" for "Rego-Fix". The series number is the opening diameter of the tapered receptacle, in millimetres. ER collets collapse to hold parts up to 1mm smaller than the nominal collet internal size in most of the series (up to 2mm smaller in ER-50, and 0.5mm in smaller sizes) and are available in 1mm or 0.5mm steps. Thus a given collet holds any diameter ranging from its nominal size to its 1mm-smaller collapsed size, and a full set of ER collets in nominal 1mm steps fits any possible cylindrical diameter within the capacity of the series. With an ER fixture chuck, ER collets may also serve as workholding fixtures for small parts, in addition to their usual application as toolholders with spindle chucks. Although a metric standard, ER collets with internal inch sizes are widely available for convenient use of imperial sized tooling. The spring geometry of the ER collet is well-suited only to cylindrical parts, and not typically applied to square or hexagonal forms like 5C collets.

An ER mill collet can also be used in a small micro lathe in the place of a chuck to clamp the workpiece. The ER collet system consists of a main shaft or body with a threaded end, a nut, which screws onto the main body and interchangeable collets. 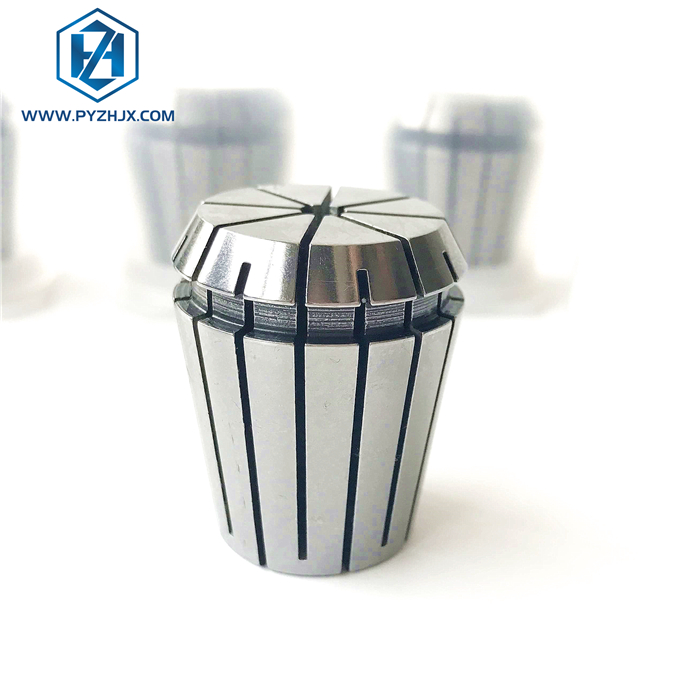